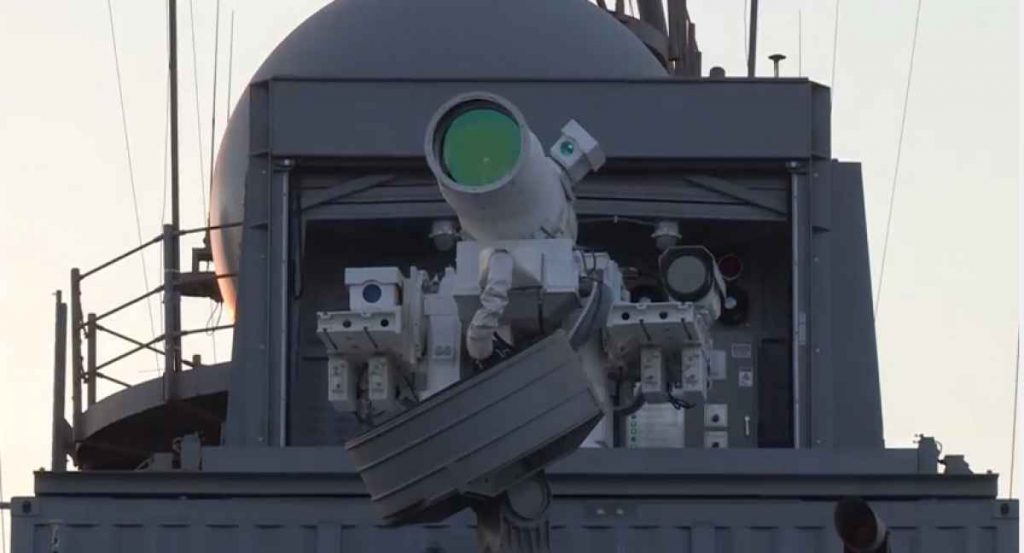 With a flick of a videogame-like controller, the sailor locks the laser onto the drone in mid-air. Within seconds, there’s a flash of light and sparks, and the drone nosedives straight into the ocean, the latest victim of the U.S. Navy’s new Laser Weapon System (or LaWS). The laser, mounted on the USS Ponce, has been stationed in the Persian Gulf for months, and today the Office of Naval Research released video of the first successful, live-fire tests there. Watch below:

In the video, the laser locks onto what appears to be a rocket-sized object towed on a platform behind a boat. The rocket catches fire and explodes, leaving the rest of the platform largely untouched. In the second demonstration, the laser hits a rack of tubes on top of a patrol craft, one containing a small shell or rocket of some sort. Again, the laser incinerates the rack, but leaves the patrol craft, and its wooden mock-up of a driver, largely intact. In the third demo we see it hit a Scan Eagle drone out of the sky.

“Laser weapons are powerful, affordable and will play a vital role in the future of naval combat operations,” Rear Adm. Matthew L. Klunder, chief of naval research, said in a press release. “We ran this particular weapon, a prototype, through some extremely tough paces, and it locked on and destroyed the targets we designated with near-instantaneous lethality.”

While it cost millions to develop, the Navy touts the laser as both a precise and cost-effective weapon. From the press release:

“At less than a dollar per shot, there’s no question about the value LaWS provides,” said Klunder. “With affordability a serious concern for our defense budgets, this will more effectively manage resources to ensure our Sailors and Marines are never in a fair fight.”