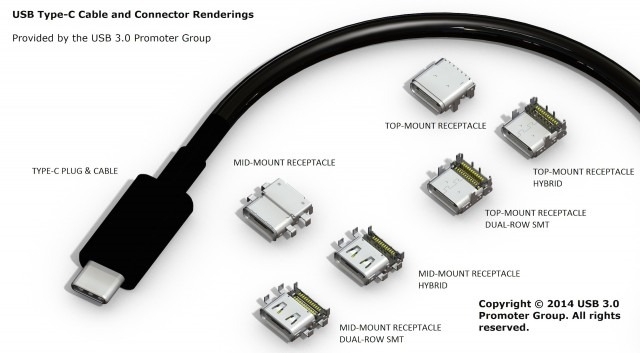 The USB Promoter Group has announced that the greatest invention in the known universe — the reversible Type-C USB connector — is finally ready for mass production. The USB Implementers Forum will now take the Type-C spec and start building devices, cables, and adapters that support the new reversible connector. We could begin seeing Type-C USB devices over the next few months, but considering the lack of backwards compatibility (an adapter is required), and the fact that the existing Micro-USB connector is mandated as the standard mobile phone charging connector by several governments around the world, it may take a little while for Type-C to reach critical mass.

The reversible Type-C connector is roughly the same size as the existing Micro-USB connector at the bottom of your smartphone, but it’s reversible. If that wasn’t enough, there will also be new USB cables that have a Type-C connector at both ends, finally giving consumers the feeling that they are the ones in charge, not some pesky cable. Just take a moment to imagine it: In a few months, you’ll be able to grab a USB cable and just plug it inwithout a care in the world. I’m not entirely sure why we had to wait 15+ years for such a breakthrough, but I’m glad we’re finally there. The Type-C connector, which has 18 pins, is essentially two USB 3.1 SuperSpeed connectors (which have the standard four pins, plus five more to enable 10Gbps connections). If you plug the connector in one way, the top set of pins are used; if you plug it in the other way, the bottom set of pins are used. It’s pretty simple. The Type-C connector also supports the new USB Power Delivery spec (also finalized today), which allows for up to 100 watts to be carried over a USB cable (enough to charge a laptop or power most peripherals, including a monitor).

As you have probably worked out, you sadly can’t plug a Type-C plug into older USB sockets — but it is possible to create a standard Type-A-to-Type-C cable (from your older PC to a new Type-C smartphone perhaps). The new USB Type-C spec also outlines the creation of adapters — for example, from Micro-USB to Type-C. As you can see in the various diagrams below, the new 18-pin Type-C still has the original four USB pins — they’re just in a different position. The USB Promoter Group says the Type-C connector is rated to the same 10,000 cycles as Micro-USB, though I’m sure the more-complex design and smaller pins might cause some issues.

With the Type-C spec finalized, it now comes down to the USB-IF to actually implement the sockets, plugs, cables, adapters, and devices. The problem is that there are billions of existing USB devices and cables that will need adapters and new cables to work with new Type-C devices. It’s a lot like when Apple released the Lightning connector, but on an even grander scale. Further exacerbating the issue is the fact that China, the EU, and the GSMA have all agreed that new mobile devices use Micro-USB for charging — though it might be as simple as including a Micro-USB-to-Type-C adapter with every new smartphone.

Considering just how happy reversible USB cables would make consumers, though, I imagine it’ll be adopted pretty quickly. Hopefully we’ll start to see some motherboards with the Type-C socket in the next few months, and then some cables and adapters soon after that. We’ll probably see the first Type-C smartphones in 2015. Expect some of these Type-C connectors to support the new Power Delivery spec, too (especially in laptops and desktops). In the meantime, of course, be sure to read our guide on how USB charging works, and how to avoid blowing up your phone.