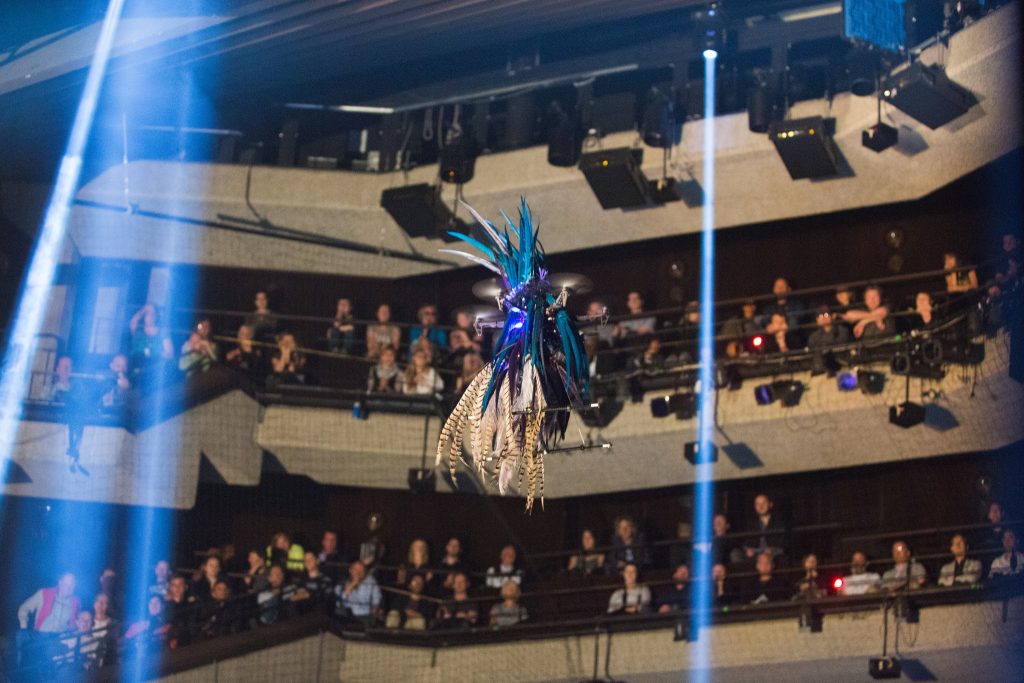 The music of John Cale converged with the speculative architecture visions of Liam Young at the Barbican’s Digital Revolution exhibition this past September. It was the first-ever drone orchestra performance and from a whirlpool of collective, creative energy, came a swarm of unmanned flying objects with the express purpose not to kill, but instead to entertain.

“LOOP>>60Hz: Transmissions from the Drone Orchestra was a collaboration between airborne architecture and music,” explains Cale, a multi-instrumentalist, and one of the founding members of the Velvet Underground. In a new documentary, above, The Creators Project captures Cale and Young’s unlikely partnership, which includes an immersive live music and drone performance and its accompanying online experience, City of Drones, developed in partnership with FIELD.

Before they met, Young received a phone call from Cale who had seen an earlier work of his called Electronic Counter Measures in which Wi-Fi routers on a flock of drones broadcast a pirated Internet signal, like an “aerial Napster.” Young had also begun testing speakers on drones, launching ones at Burning Man that played Wagner’s “Flight of the Valkyries.” An innovator in the music world, Cale was intrigued by the opportunity to embed his signature audio style onto a flying multichannel “orchestra.” As Young and Cale talked, they imagined what a drone could become once it was stripped of its traditional narrative of war and terror. Their vision was to have drones shed their hard technological shells and take on more human-like characteristics by blending live audio with the mechanical bots.

It took two years alone to find the right venue. “There’s a good reason why this has never been done before. Putting these technologies above people’s heads are really violent. They spin at extraordinary speeds. The propellers can take someone’s head off,” explains Young. The idea was to bring people into direct relationships with the technologies. By having the bots interact with humans in a playful way in a closed arena, creating physical interruptions with the sheer velocity of their propellers, people could experience the drone as an “everyday object,” and not as a weapon. The Barbican Theatre bravely stepped up to the plate.

Cale remixed and reengineered his music for the performance. “I redrew the map. I changed the arrangements, made them much harder and more urban and colder. This made the voices stand out more, and the singing that much more emotional,” he explains. A few drones from a flock of 15 would carry his voice to different areas in the room during the performance. Inspired by Cale’s previous work with drone ambient sounds, additional flying bots were augmented with speakers to amplify the mechanical humming of their motors, generating noise that was then incorporated into the live composition.

The drones also had to be programmed with a set of behaviors in the same way a choreographer teaches a dancer what steps to perform. Software lead Andreas Müller developed an ultrasonic beacon tracking system that could allow the team to manipulate light, create a smoky haze effect, and use the whole of the theater for their choreography.

Like dancers or actors, the drones had their own couture costumes such as bright green and blue plumage, a coat made from 500 phone charms sourced from Chinese markets, a box-like structure decorated with hazard tape, and even a shiny disco suit made from 4,000 fake nails. Each transformed the drone into a cultural object, a unique “species” with its own personality and temperament, that had a specific role to play in acting out Cale’s soundscape. For example, says Young, the disco drone was designed to represent a sail during Cale’s track about ghost ships. “If you have one drone, it’s a mystery, If you’ve got two drones, it’s a love story. And if you have any more than that, it’s a family brawl,” says Cale. Young adds, “That’s what we do. We find characters in technology.”

Producer Keri Elmsly stood in the orchestra pit during the performance, coordinating takeoffs and landings. “It was like a military operation,” she describes, “And you had no idea what would happen.” The challenges in creating a performance that combined drone technology with live music were monumental, especially getting them to fly in the first place. The costumes, she says, made the aerodynamics unpredictable.

Technical challenges cropped up even in the hours before the show. The original plan for the performance was to have the drones be autonomous. But when the automated system failed, the team had to adjust the show for manual overrides, and a team of pilots took over. Nita Scott, Cale’s manager and a producer on the performance, directed flight patterns, entrances, and exits from a freshly-built launching platform where she could see both Cale and the pilots. “The most critical thing was to be sure the artistic concept remained true, and none of the drones would run out of battery life prior to my directing them to land,” says Scott.

With the weights on the bodies of the drones, the batteries drained quickly, within five-to-ten minutes. A team of battery changers had to “resuscitate” the drones periodically during the 80-minute-long performance. “It’s quite an extraordinary infrastructure behind the scenes,” says Young. “We just see the drones in the air, but actually it’s just one part of a much larger technological system.”

Prior to the live concert experience, an online portal was commissioned by The Space and created by Cale and Young, in collaboration with Field.IO. In City of Drones, viewers can pilot a lonely drone through an endless abstract cityscape, seeing the landscape as it would. The interactive digital environment was the world in which they could frame the performance, says Elmsly. “It gave us a visual language of power that we couldn’t employ in the theater,” she adds. In a future theater work, she and the team would like the opportunity to marry the online experience with the performative piece.

When Ruth Mackenzie, interim CEO and creative director of The Space, first heard about LOOP>>60Hz from The Barbican, she was struck by the idea of having real life drones in a closed concert hall space: “It sounded thrilling and dangerous,” she says with a laugh. For the commissioned work that would exist online, Mackenzie and The Space challenged the artists to create something that would replicate the same danger, interactivity, playfulness, jeopardy, and visual variety as the performance. “In a funny way, City of Drones gives you a more intimate experience of the drone,” she says. “It is a digital world of a really high order of artistic experience and innovation.”

Still from City of Drones

City of Drones aligns with The Space’s overall mission to share new innovative artworks that comment on digital technology’s impact on creativity, for free online. They launched their annual Open Call for creative works that consider the mobile device as a medium, earlier this year. The shortlist will be released in December, and the winners in early 2015.

Mackenzie is interested in how drones are being used in military and surveillance currently, and appreciates how Cale and Young’s futuristic vision of their use and purpose puts them in a new light. And Elmsly agrees: “One day in the not-too-distant future, we’re no longer going to ask ourselves why we have the drones.” The discussion about the future use of drones and its implications was what enticed her to join the project in the first place. Whether there’s more drone art to come, Mackenzie can’t say for sure, but he believes it will take a while for a drone to be viewed as an ordinary object, stripped of its negative connotations.

The LOOP>>60Hz drones are resting up after their big performance, but maybe not for long: “They’re living in bubble wrap in my studio at the moment, but you can’t cage an animal like that,” says Young. “We have to let them out and find them a new place to roam.” 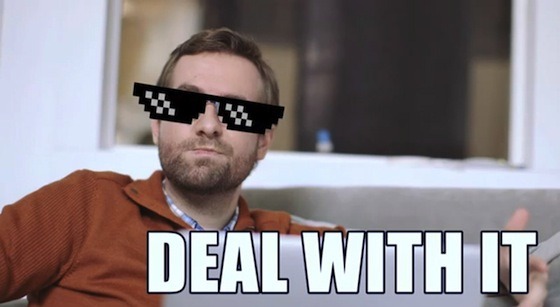