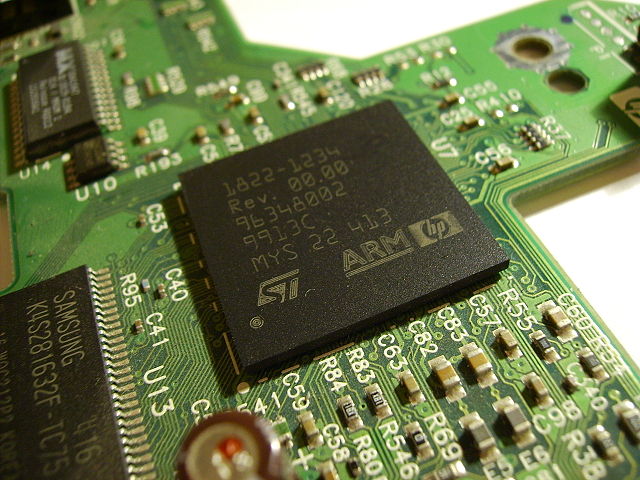 Millions of electronic gadgets around the world invade our daily life and we have become completely dependent on them for performing most of our work. A very nice example to justify this would be a smartphone that everyone is quickly adapting to, due to its varied features. These gadgets are the pleasing results of the ceaseless developments in the field of electronics. Most of these gadgets are fitted with embedded processors that not only occupy less space but also ensure that users get a smooth experience whilst using the device. The processor cores of these devices follow an architecture that helps them perform efficiently.

History of ARM
Advanced RISC machine (ARM) is the first reduced instruction set computer (RISC) processor for commercial use, which is currently being developed by ARM Holdings. The history of ARM processors dates back to 1983 in England when Acorn Computers Ltd officially launched an Acorn RISC Management project after being inspired to design its own processor by Berkeley RISC, one of the high-impact projects under ARPA’s (Advanced Research Projects Agency, now converted to DARPA) VLSI project, dealing with RISC-based microprocessor design led by David Patterson who coined the term ‘RISC.’ As the name suggests, it does not mean that the processors with less than 100 instructions are qualified to RISC category, but instead they should have an highly optimised instruction set.

ARM in the beginning was known as Acorn RISC machine. With VLSI Technology Inc. as its silicon partner, ARM came up with ARM1, the first ARM silicon on April 26, 1985, which was used as a second processor to the BBC Micro to develop the simulation software to finish work on the support chips (VIDC, IOC and MEMC) and to increase the operating speed of the CAD software used in development of ARM2. Apple, whilst developing an entirely new computing platform for its Newton, a personal digital assistant, found that only Acorn RISC machine was close to the requirements needed for implementation, but since ARM had no integral memory management unit, Apple collaborated with Acorn to develop ARM. The result of this collaboration was that both Acorn Group and Apple Computer, Inc., with 43 per cent share each, and VLSI Technology, Inc. as an investor, a separate company, ARM Ltd, was established in 1990. Also, the advanced research and development section of Acorn was employed here. After that time, ARM became the acronym for advanced RISC machine.

But what was Berkeley RISC?
In the past, CISC microprocessor cores like Motorola 68000 used only a subset of the available instruction set; therefore most of the decoding circuitry for the never-used instructions was wasted. But in RISC, CISC was replaced with multiple registers to speed up the execution since access to these registers would take less cycles than memory access needs, outperforming CISC. Considering the case of ADD instructions in which CISC would appear in different formats where one would be meant for adding the numbers in two registers and placing the result in third, whilst the other would allow to add two numbers stored in the main memory and store the result in a register, offering wide variety of instructions to perform the required operations and providing several options as operands.

But in the case of RISC designs, the ADD would always take registers as operands, which creates a necessity for the programmer to write additional instructions to load the values from memory whenever required. Now, the Berkeley RISC was able to provide good performance utilising pipelining and register-windowing technique. In register windowing, the CPU contains a large number of registerss around 128, together called a register file, whilst the group of eight registers is called a window. But a program can only use one window, thereby allowing fast procedure calls. The call simply moves the window down to the set of eight registers used by that procedure and the return moves the window back.

After that time, RISC has seen a lot of developments proving its simplicity over CISC. Here are some of the features of RISC:

What features does ARM provide?
British multinational semiconductor and software design company, ARM Holdings plc, offers complete solutions that are essential for the manufacturing process, but the company does not manufacture ICs. Moreover, it provides software development tools under the brand Keil and RealView. It also provides ARM architecture licensing for the companies that want to manufacture ARM-based CPUs or ‘system-on-chip’ products.

The ARM architecture is a simple hardware design allowing things to be left off the chip. It helps in creating small die-sized chip which helps in considerably reducing the cost. Its low cost, simple pipeline construction and the freedom to put the design point where the designer finds it suitable for low-power consumption adds onto the benefits it provides for embedded applications.

ARM cores are simple compared to other processors since it can be manufactured with few transistors. ARM is a 32-bit instruction set architecture. Today, many embedded applications like smartphones, set-top boxes, digital televisions and digital cameras use ARM processors due to their cost-effectiveness and low-power consumption. ARM architecture is compatible with all four major operating systems, i.e., Symbian OS, Palm OS, Windows and Android OS.

An ARM processor consists of 31 general-purpose 32-bit registers. Sixteen registers, namely R0-R15, are visible, which means they can be modified by the user whereas other registers help to speed up the exception process. Some registers play some special roles, like R14 acts as a link register (LR), R15 acts as a program counter (PC) and R13 acts as a stack pointer.

There are two important registers in ARM, namely current program status register (CPSR) and saved program status register (SPSR). CPSR is similar to PSWR register in 8051microcontroller which indicates some important flag bits like carry bits and zero flag bits as shown in Fig. 1, whereas SPSR is used in exception modes. Whenever exception occurs, the contents of CPSR are copied to SPSR. The organisation of registers in an ARM processor is as shown in Fig. 2.

The ARM architecture has evolved through many stages; the smartphones employ ARMv5 architecture and the later releases. Hardware floating-point unit (FPU) is the major change brought in ARMv7 to provide more speed than the software-based floating point. Even DSP instructions were added to the set to improve the ARM architecture for use in digital signal processing (DSP) and multimedia applications. In ARMv7, even the Thumb-2 feature, to obtain code density as Thumb and performance as ARM instruction set, was added that extends 16-bit Thumb instruction set with 32-bit instructions, producing instruction sets of variable lengths. A new ‘unified assembly language’ (UAL) support is provided to generate Thumb-2 or ARM instructions, whichever is required from the same source code. The new ARMv8 has undergone a considerable change by using 64-bit architecture and cryptography instructions supporting AES and SHA-1/SHA-256, and even allows 32-bit applications to be executed. An optimised ARM smartphone block diagram is shown in Fig. 3 (Source: www.arm.com).

Therefore this ARM architecture with brilliant features is widely adopted by many organisations (more than 2500 organisations are licenced with IP), as a result of which it is the world’s leading semiconductor IP supplier, having over 40 billion ARM-based chips shipped to date, providing each user with smooth experience. So with ARM and its ever-improving architecture, the future of computing devices not only has a better scope by being cost-effective, but they also have plenty of features to offer.
The authors are BE final year students at NMAMIT, Nitte

Supercharge your PC’s storage with a RAID setup: Everything you need to know

Meet the e-voting machine so easy to hack, it will take your breath away